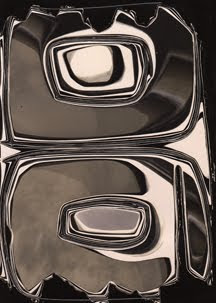 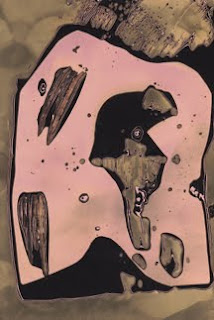 I'm not going to be systematic here, but simply want to illustrate what some of the options are. The two examples above were printed together, in a single run, in Dektol developer, acid stop bath, and acid fixer (ammonium thiosulfate) with hardener, choices that were somewhat random because that's what I had in the darkroom that day. In general you don't want hardener (alum) in your fixer, and you may want to try an alkali fixer with or without an acid stop bath. So be it. We started with Dektol at 1:7, although concentrations aren't always important in a chemigramic process as contamination occurs routinely and may even be encouraged, depending on technique. The paper on the bottom is Adorama FB warmtone, the one on the top Ilford MGIV RC. No toners were used. Between these two papers, tonal contrast is immediate and vivid.

We could have attempted to modify our results further by fiddling with developer ingredients such as accelerators and restrainers, but that would have meant separating the trips the papers made down the printing pathway - no big deal, but not what we intended. Sodium carbonate, an accelerator, might have been invoked to bring a colder tone to the Ilford, or sodium or potassium hydroxide for that matter, while a restrainer like potassium bromide or even table salt could have brought warmer colors to the Adorama. If we had used a developer like Ethol LPD, which produces cool tones at high concentration (1:1) and warm tones at dilution (1:7), further pushes in corresponding directions could have been expected.

The resist used in both cases is Golden MSA (mineral spirit acrylic) picture varnish, diluted 1:1 in mineral spirits.
Posted by dcollins at 8:41 AM