HackelBury, the prestigious London gallery, has mounted a major and very timely exhibit of Pierre Cordier's work, overlapping with but not eclipsing the still-running V&A show, and not to be confused with the HackelBury booths at the AIPAD and Armory shows in New York at which we are promised still more Cordiers.


This is the year for Pierre Cordier - and for chemigrams.  It's been a long time coming.


In a moment now legendary, Cordier hit upon the chemigram method one day in 1956.  Well - that's his story and it makes good copy.  But just as Newton stood on the shoulders of giants, so did Cordier have his antecedents, Teske, Kesting, Tabard, Chargesheimer, others.  Fox Talbot, in the opening pages of The Pencil of Nature, recalls his startling experience of stumbling upon color in silver salts in the year 1838 ("I discovered a remarkable fact of quite a new kind").  Cordier's insight, however, was to see what no one else saw: that photography is not just about looking and recording - he had done a bit of this himself in his early twenties, so he knew - but about evoking and extracting imagery that is essentially trapped, as a capacity inherent in material, within the physical and chemical confines of the very stuff of his art, the silver halide emulsion.  For him the artistic enterprise is always a dialog with the bruteness of matter.  That's where it starts and ends.


He has spent a lifetime thinking about how to make a photograph from the inside out.


In the HackelBury Gallery, we are fortunate to have gallerists sensitive to the stunning beauty of these works.  I withhold my preferences: there is altogether too much wealth here.  Let it simply be said that the inspired, grueling labor that went into 'Mineral vegetable animal' (1976) will likely never be repeated.


How can we begin to learn from his work, his methods?  One way is through his writings.  His great monograph, Le chimigramme/the chemigram is the place to start; because of the 'Shadow Catchers' show, it's available at the V&A Museum shop in London and they'll ship anywhere in the world.  There's also Martin Barnes' catalog for the V&A, with an important chapter on Cordier, and finally, for those still needful, the in-depth interview with Cordier in the upcoming March-April issue of Photo Technique magazine.

In future posts we intend to examine aspects of the Cordier oeuvre, with some of the grit and the how-to, for the benefit of practitioners.  The lesson plan says to start by seeing this show.  It runs till March 31.
Posted by dcollins at 9:05 AM 3 comments: 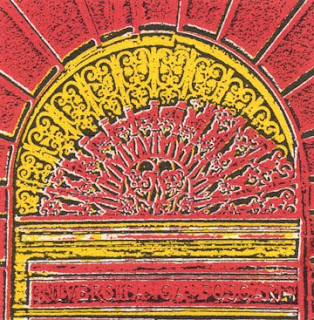 There are various ways to apply varnish (or hard resists) to photographic paper to make chemigrams. One of the methods used by Pierre Cordier in his pioneering chemigram experiments dating back to the 1950s was to use the printmaking technique of silkscreening. If you're not a printmaking aficionado, you might best recognize silkscreen as the medium made popular by Andy Warhol, Richard Hamilton, Eduardo Paolozzi and other luminaries of the British and American Pop art movement of the 1950s and 60s. Basically, ink is pushed or squeegeed through a motif or design photographically or mechanically applied to a fine mesh screen. The ink only comes through the screen and onto your paper where there is an open area of the design. Such a technique should in theory allow any kind of fluid medium to be pushed through a screened design...and so last fall, as Doug Collins and I worked our way through various ways of applying varnish to photographic paper, we decided that I should use some of the screens I'd made for a series of small prints (like the one above) to make chemigrams. The print above was made with three separate screened images, corresponding to each color in the print. I decided to use the image that I printed in black--the most linear of the three "layers"--as a way of applying varnish to photographic paper. I used Golden's matte acrylic varnish and diluted it about 1:1 with mineral spirits, applied a small amount to my screen and pulled a squeegee over it, thus transferring varnish to paper. What did it look like once I processed the resultant chemigram, you are by now asking breathlessly. 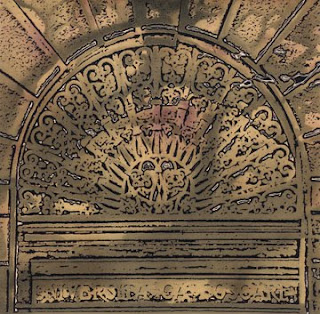 The screened varnish created the black areas you see on the print above. Interestingly, there wasn't much difference between the silkscreened ink lines and the black lines in the chemigram created by the action of developer as it slowly (or not so slowly) seeped under the very thin ribbons of varnish and lifted it from the paper. (The background tones in this chemigram were created by dipping the paper first in developer for c. 2 seconds, then fixer for 2 seconds, then back into developer for the first 3-minute "cycle" [as per Pierre Cordier's original instructions].) However, a second print made in the exact same manner yielded a completely different result: 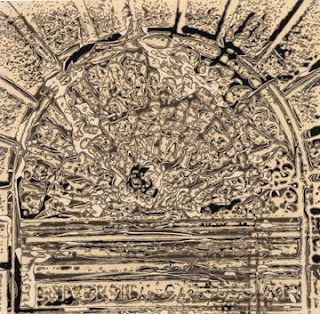 The second chemigram displays many of the standard characteristics of the form: Mackie lines, fragmentation, abstraction, etc. It's easy enough to describe the differences between the two prints but much less easy to explain why they occurred. Although the diluted varnish was screened onto both prints at the same time, perhaps the deposit of varnish differed in weight or thickness, or perhaps the second print was processed when the varnish was not quite dry. It seems to have the characteristics of chemigrams made with "soft" resists like honey, syrup, Vaseline or soft glue. At any rate, I did not dip this print into developer and fixer before the first long developer bath, which explains the lack of colors but not necessarily the fluid final appearance.

The potential lesson here: screenprinting is yet another way to apply resists to chemigrams but the variables still seem nearly infinite and perhaps require very careful monitoring and note-taking during the process. And aesthetically, I'm not sure either of these prints are all that interesting; perhaps what makes a good silkscreen design does not necessarily make a good chemigram.
Posted by rht at 5:40 PM 3 comments:

I've known Paul for just about five years, not long as things go.  He's an upriver neighbor of mine if you stretch it a little, in the Hudson River Valley north of New York.  I didn't know it at first, but he's an old friend of the great etching teacher at Manhattan Graphics, Vijay Kumar.  Occasionally Paul would come around and show me his ink drawings, landscapes mostly, long lonely lines of dim trees and shadowed hills under a deft touch.  They had a sparse poetry, so unlike the grinning, affable man I knew; I liked them enormously.

To return the favor, I invited him one day into the darkroom to play with photo paper and light.  After trying first this and then that, he began to settle on a halting, inky language of blurred signs, which I took as another way of expressing the loss and longing (if that's fair) implicit in his spare landscapes, another of his voices.  Here are a couple of pictures from that day; whatever their genesis, for me they deliver a nice shot of glassprint charm and tag.