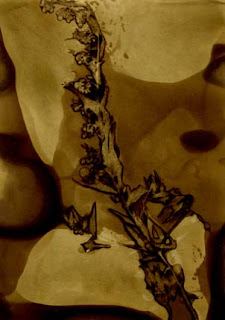 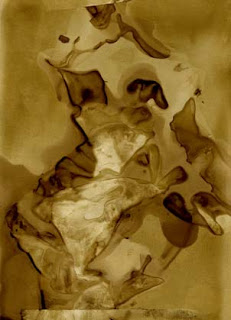 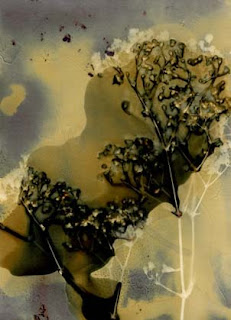 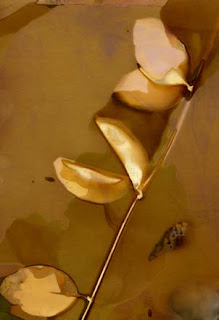 
Roberto "Bobby" Bashir is a young man living in the valley below my mountain cabin on the Monterey Peninsula. He works as a seafood cook, and when he's not inspecting new shipments of squid or salmon or arranging things on a plate, he likes to make lumen prints, which he does out back behind the restaurant. He uses the bounteous wildflowers of the region, grasses, leaves, and more recently the leftover food from customer plates, trimmings, and kitchen scraps. He picked up the technique down the coast in Ventura, and does it to amuse himself.

Bobby mostly uses Foma FB paper from Croatia, which he gets from Freestyle. He likes the reds and earthy oranges, and the delicate feel of it as it dries. He exposes for 20-30 minutes (we're in California mind you), fixes in ammonium thiosulfate for maybe a minute or two, washes ("have to do it, but I lose the great deep blues and cyans from the fixer"), then usually soaks it in Kodak Rapid Selenium toner until he's satisfied. Then a final wash, and dry. And yes, he wears gloves and is very careful not to contaminate the kitchen, but he asks us not to reveal the name of his restaurant. Just in case.

What I love about his process is his use of juices and teas as a thin bath for the plants or foods on the paper. As these liquids dry, they lightly develop a trail on the paper, creating an illusion of depth or shadow which goes well with the quiet lyricism of his work. He favors the multifruit concoctions so prevalent nowadays like orange-pineapple-mango, and the unsweetened iced teas. Another advantage of using liquids where plant meets paper is that you reduce the problem of things sticking to the paper, a problem common in lumen printing, particularly in long exposures. Jalo Porkkala's excellent Finnish site 'vedos' discusses these and many other issues in lumen printing in a fairly thorough way; interested artists should consult it. I also recommend spending time looking at the late Jerry Burchfield's work, both his pictures and his articles on lumen printing. Meanwhile, back to the kitchen with Bobby Bashir.
Posted by dcollins at 1:52 AM 2 comments:

Mackie himself was never sure.. 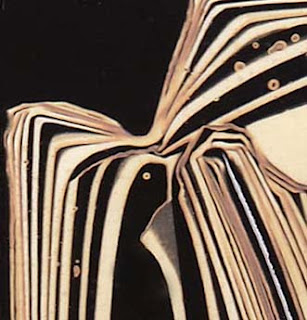 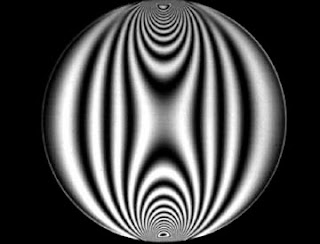 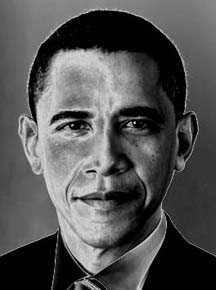 Obama solarized
Alexander Mackie arose at a meeting of the London and Provincial Photographic Association in 1885, as colleagues advanced theories about lines that sometimes appear around a figure or shape in a photograph, a bit like halos. "No, no, sir!" he cried. "That simply won't do. That doesn't fully explain it at all." For each theory brought forward to explain the mysterious lines, Mackie disproved it with a counter example. He showed pictures, he demonstrated his theses with objects, vases and tables. Optical illusions, effects of radiation, disparity between central and marginal rays of a lens, exhausted developer, nothing withstood his intellectual rigor. When the matter was revisited in subsequent meetings Mackie was again there. He haunted these meetings. He garnered a reputation: the guy with the lines nobody can explain. After thirty years of this - thirty years! - he could take no more, and wrote a letter to the august British Journal of Photography (64, 11-12, 1917) saying (in effect), "Hey, everyone associates these lines with my name as if the matter were settled, but that's far from the truth. We still haven't a clue."

If Mackie himself was never sure what a Mackie line was, no one else was quite sure either. But certain ideas have stuck, and have spread out in the world. In the field of photoelastic stress analysis, for example, they use the edge effect of pseudo-solarization (also known as Sabatier) to construct models of the stress distribution in materials; the lines of stress are called Mackie lines. You want to know where an I-beam will break, you find its Mackie lines.

In his Theory of Photographic Process (1942), C.E. Kenneth Mees was already able to describe Mackie lines as "the commonest adjacency effect" and said it was a white line formed at an abrupt enhancement of density at a border. Later, in his landmark monograph on photographic solarization (1997), William Jolly discussed a half-dozen border effects including Beck lines, Mach bands, Sabatier border lines and Mackie lines. He put Mackie lines in a special class very near to Sabatier border lines and (with a little arm waving) described a back-and-forth flow over the border of developer and reaction products and their excitatory or inhibitory effect on silver grains.

I've always thought highly of this explanation, but when I'm standing over my trays, poking at my paper, I can't help but feel otherwise for the case of chemigrams, which have had a somewhat closeted history since Cordier's discovery of them in 1956. The erosive appearance of border lines seen in chemigrams looks to be due to straightforward chemical attack, in developer and then in fixer, during the gradual, progressive removal of overlying resist. The developer darkens, the fixer lightens, each does its normal job, and the border recedes. At least this is the simplest explanation; the gentleman from Ockham taught us to always choose the simplest.

You could construct, or imagine, other scenarios. Trans-border diffusion of bromide, counter diffusion of developer, electromagnetic radiation collected in the exposed areas causing an inhibitory heating effect in adjacent areas, etc etc. Yet to me the evidence is merely suggestive at best, and the border appearance in chemigrams may not warrant such involuted theories anyway. This is because what we want to account for in chemigrams doesn't have the same origin as what we want to understand in other border situations, in Sabatier or in solarization - the phenomena arise differently.

I must confess though, at the end of the day the border effects in all these can be seductively similar. For that reason, for that similarity, we choose to retain the name Mackie line for the characteristic erosive line in chemigrams. Mackie wrote to the Journal about everyone using his name for these lines and said, "the connection has not arisen from any choice on my part, but was adopted merely as a convenient expression for avoiding an inconvenient descriptive formula of words." If he were alive Mackie would grumble a complaint to our blog, and we would know he's right, but it would change nothing.

The chemigram at top, Florence H., is pure Mackie lines.
Posted by dcollins at 3:40 AM No comments:

Richard Turnbull to speak at Christie's Richard Turnbull, Istanbul, Turkey, 2010
Rich will speak on Photography Transformed: The Digital Revolution and Beyond, 1990-2010 at Christie's Education, 11 West 42 Street, NYC, October 5, 2010, 6 to 8 PM. His talk is part of a four-lecture short course program conceived by Christie's Photographs and Christie's Education aimed at perfecting connoisseurship skills, and will cover topics such as historical processes and photography's place in contemporary art. The program is scholarly in intent and is not open to the general public. The course fee is $450.

Rich Turnbull holds the chair in art history at F.I.T. and lectures on photography at both the Museum of Modern Art and the Metropolitan Museum. He is also an artist and a contributor to this blog.

Christie's will follow up this course in December with a Champagne Tasting Master Class.
Posted by dcollins at 4:53 AM 1 comment: