What is Matt Higgins doing?


Matt Higgins is an Australian who eats, sleeps, and dreams chemigrams.  At the Australian National University he's deep into writing a thesis called Chemical Potential: A Darkroom Upside Down.  You'll want to urge your local bookseller to stock it.  He speaks of the joy and madness of doing everything wrong, of committing crimes against paper, abusing it, mocking it, and in the process making images that push hard against the boundaries of what can ultimately be done with photography.  He should probably be locked up he's so bad.  Until then let us enjoy the pictures he's able to give us.

What you see above is done using one of his favorite tools, acrylic gloss from a spray can.  He covers his paper, then plunges it into chemistry according to a certain timing - timing is everything in chemigrams - and goes on from there, making a terrific mess before it quietly acquiesces and turns beautiful.  Another favorite is a gunk called apple stroop, sort of an apple syrup, which if used right can yield works like this one: 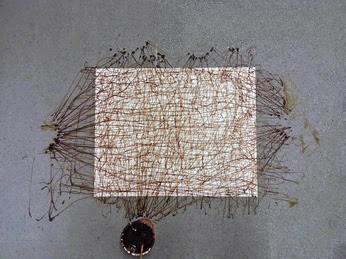 where you can see the pot of syrup at the bottom, and the recent lines of attack at the four sides.  Higgins seems to be evolving rapidly : it was barely a year ago that he was making the classic chiseled-square or checkerboard pictures that appeared in Christina Anderson's book, but those days are far behind.  One technique that thankfully hasn't been dropped from his arsenal is the loose acrylic approach, with which he effortlessly produces pictures like this:


He lives in Canberra, where since the age of 10 he has had a relationship, possibly illicit, with another Canberra resident, Jackson Pollock's Blue Poles at the Australian National Gallery.  These are frothy waters to be swimming in.  Matt Higgins is handling it, and not ready to come ashore.