We continue to think and wonder about the colors created in chemigrams, where silver halide complexes, embedded in black and white photo paper, can be induced to yield a gamut of colors from the subtlest pinks and yellows to the richest indigos and violets.  Of the many questions evoked by the chemigram procedure - and there are many - one is paramount not just to artists, the chemigramists themselves, but to collectors, dealers and museums, indeed to the whole enterprise, and that is this: how permanent are these colors?  Do they degrade over time?  Which colors change in hue and which do not?  Over what timescales do changes, if any, occur?

First, a practitioner's observation.  Chemigram colors do in fact evolve and mutate throughout the entire creation pathway, as waves of fixer, developer and byproducts besiege the emulsion.  This continues, muted, into the final wash and even to the drying.  We know it because we see it.  It seems to persist for certain tones right into the early days of the post-dry period, though we're not sure where that ends, so lowkey do the changes eventually become.  It could be related to how much silver halide still clings to the paper, or how complete the wash was.  But even discounting that, such changes are real.  That's why some chemigramists prefer to scan their work as soon as it dries, to ensure the vibrancy of the original colors is preserved.  Nothing worse than having your work disappear on you.

What about the longer term - years, decades - what happens then?  To help find an answer our colleagues in the laboratory at Golden Paints in New Berlin NY conducted lightfastness tests on chemigram samples we provided, using their state-of-the-art QUV apparatus.  This device exposes samples to UV radiation simulating indoor, gallery-lit conditions, but vastly compresses the timeframes: 400 hours of constant exposure in this box is the equivalent of 33 years in the real world (technical details are found on the Q-lab website).  We went for a century - a nice unit! - in three 400-hour segments, at the end of each of which the samples were withdrawn and compared to the original.  These comparisons could have been rigorously quantified in Cielab colorspace, the delta-E or amount of change could have been calculated, etc, but all we wanted was a first-look kind of result.  Here is some of what we found.

In figure 1 the upper right corner piece is the original; the three slices descending toward the left lower corner are pieces that received 400, 800, and 1200 hours of exposure respectively.  While difficult to see at the scale of this post, there is a slight loss of warmer reddish tones by 400 hours.  At 1200 hours there is an overall darkening, or perhaps dulling is a more accurate description, a vague muddiness.

In figure 2 the original is on the right, with progressive exposures increasing toward the left according to the technician's notes on the scan.  Of the many samples documented this showed by far the most dramatic changes, with the warm tones dropping out completely even at 400 hours.  The subsequent gray tone maintains its value, but darkens somewhat by 1200 hours.

It is true that the snippets sampled were not uniform or even systematic: chemigram tray time, paper type, wash time, idiosyncracies of the artists (several supplied samples) all varied considerably.  In addition, the UV spectrum used in the exposures may not be predictive of actual conditions in a gallery, where lighting can vary from fluorescent of various types to daylight.  And yet from this we feel entitled to form certain impressions - a sense of the slow degradation of the colors, some perhaps more than others, against a background of an inevitable increase in entropy.  Left unspoken is the mechanism for these changes, since chemigram colors owe nothing to either dyes or pigments but instead to the size of certain objects - polymorphic clumps of silver bromide or chloride - and the wavelengths of light reflected from them.  The Mie effect was mentioned in an earlier post, and will be revisited in the future.  Still, for now we can be cautiously optimistic in the belief that, if our chemigrams have not altogether gone bad in our trays before we hang them out to dry, they will be around in some form for quite a while, maybe a century.

The hand of Paul Bloomfield 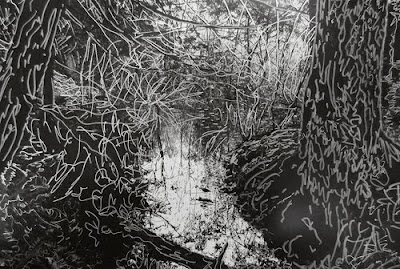 
One of my more serendipitous encounters this summer was meeting artist/photographer and teacher Paul Bloomfield at a monotype workshop at Zea Mays Printmaking in western Massachusetts. I talked to Paul about chemigram techniques and in the course of a discussion about the overwhelming presence of digital photography in contemporary life, he revealed that he has long been making what we might call manipulated or enhanced photograms in the darkroom as a way of counteracting the ubiquity of the straight photographic image. Paul's methods are quite diverse: he sometimes "paints" with developer in the darkroom on unexposed photo paper, guided by the intuitive gestural motion of his hand since he can barely see the mark of the clear developer in the dim safelight aura. Sometimes he draws on an exposed and processed photographic image with oil pigments or markers. Sometimes he is content with a straightforward but still inherently mysterious photogram, which most readers of this blog will know is an image generated by placing objects or filters/screens/whatever on photographic paper and allowing light from the enlarger to pass through or not depending on the object's transparency or opacity. 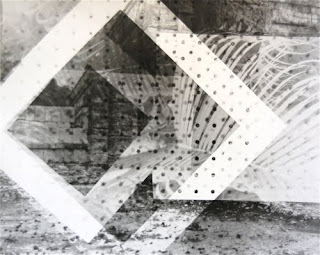 
Paul's work incorporates pattern and elements of seriality or repetition as well as marks/forms derived from nature, which he claims in the modest artist's statement on his website allow him to meditate on systems, manifestations and impermanence. Some of Paul's work appears painterly and photographic simultaneously, which of course is the point: by reworking the lines and forms of a conventional photographic image through applied pigments or markers, for example, Paul reclaims the space and "trajectories" in the image from the otherwise inherent flattening quality of a photograph. (This is indeed the case in "Dark Trees," seen above.) The resulting work is a hybrid form that while not necessarily new (photographers have drawn on their prints before) suggests above all a reimposition of the hand in the photograph...which I've suggested in an earlier post is one of the strategies we might use to survive photographically in an overwhelmingly digital world.

A word about greenery...

While spending a couple of weeks this summer at the wonderful Zea Mays Printmaking in western Massachusetts investigating green (i.e. non-toxic) printmaking techniques, an opportunity came up to show and share the mysterious beauties of chemigrams, which in turn led to a query about the safety of chemigrams and photographic processes in general. In a world where most of us are exposed to any number of potentially harmful substances on any given day, this is no small matter. I had to admit to my fellow printmakers that as far as I know, there is no green way to produce a chemigram. Even apart from the toxicity of developers and fixers used in standard black and white processing, those of you who have experimented with hard resists (e.g. the various varnishes discussed in many of the posts on this blog) already know that the only ones that really work are those soluble in mineral spirits (Golden's MSA varnish and Liquitex's Soluvar, for example) and that these varnishes in turn need to be diluted with mineral spirits (full-strength, not odorless and not Turpenoid, neither of which work) in order for them to slowly lift during the chemigram development process. Some of you have probably had the pleasure of experiencing a mineral spirits-induced headache after a night in the darkroom or the printmaking studio. The only thing I can suggest to health-conscious chemigramists is to make sure you have adequate ventilation in your work area (darkroom ventilation is a given must-have, even if you are just doing basic black and white work) and wear disposable gloves at all times. Do not mistake your solvent jar or container for your coffee cup in the dim light of the darkroom.

I would certainly be interested in hearing from anyone who has suggestions to make chemigrams greener (cyanotype chemigrams? non-solvent based varnishes?)...but I suspect it may be one of those processes, like traditional lithography, that carries with it certain hazards no matter what. A safety-conscious chemigramist is of course a happy chemigramist...
Posted by rht at 3:29 PM 3 comments: