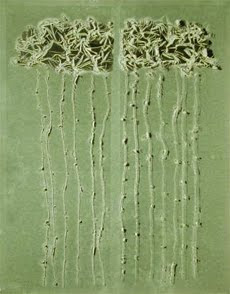 Koutroulis, Caroline's Garden II, 1968
One of the prominent names in the contemporary section of Symmes and Glassman's Cliché-verre: Hand-Drawn, Light-Printed (1980) is Aris Koutroulis, dean of the Detroit school of glassprint experimenters in the 60s and 70s. I admit my ignorance: I had no idea who he was. But over the years I've been drawn back to the few images of his work I can find, whether glassprints, lithos, or paintings, the glassprints most especially. He had learned the dye transfer process from his early teacher, Caroline Durieux, and began producing glassprints in color, but in a reductive style. I sensed that here was an artist, working within and sensitive to the conceptualist and minimalist paradigms of the art-world at the time, who inevitably, because of who he was, pushed against those limits to strive for a more personal statement. He doesn't seem satisfied with stopping short of that, or ending a picture where another artist might have. Or could it have been the other way around, that he felt he had to dress his expressionistic urges in a cloak of minimalism? We'll leave that for the critics.

The example shown here, Caroline's Garden II (1968), was done using Kodak matrix film and transfer dyes; the entire process is now an historical footnote since Kodak discontinued manufacture of all such materials in 1994. The cluster of veils of film emulsion at the top, the soft ribbons of it descending, the gentle color - that's the picture. Today, Koutroulis might have used the gelatin relief method known by some as mordançage to achieve similar results. Jean-Pierre Sudre, its modern advocate, didn't even give it a name until later.

He received training in lithography (why did so many nonfigurative photographers begin as printmakers?) at Tamarind when Tamarind was just a bare-bone start-up in Los Angeles, with two presses; in time he became one of their first master printers. He printed editions for many leading figures of the 60s. His edition of Josef Albers' Hommage to the Square (1963), printed with Ken Tyler and John Dowell, hangs in museums worldwide. His original work is scattered today and generally unavailable, occasionally showing up at estate auctions in small Michigan communities. A true shame.
Posted by dcollins at 12:47 PM