Soho Photo, formed nearly half a century ago and still going strong, is a cooperative photo gallery tucked into Lower Manhattan opposite the ultra-hip Roxy Hotel.  Its shows are always of interest, and every year they put on an alternative process exhibition where you can view some of the best in historical methods: tintypes, calotypes, daguerrotypes, cyanotypes, gum bichromates, lumens, and (not so historical) chemigrams.  We went down to inspect the turnout this year and our eye was immediately lured by the cameraless end of the roster, where beautiful and accomplished chemigrams predominated.  Is it my imagination, or has the number of chemigrams represented increased over the years?  As I recollect, a decade ago they didn't even know what a chemigram was -  I phoned them back then and they had to look it up in a dictionary.  This year there were four chemigrams on the walls.  So, at this rate... 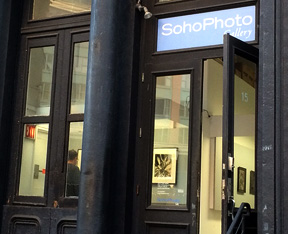 First, here is Veronica Hodgkinson with The Grid (2015), looking unselfconsciously minimalist like an early Cordier or, to make the point more emphatic, like a Carl Andre version from 1969 at the Tate in London.


If you love your chemigrams you'll love this one.  Each square seems to be relaxed about where its imagery is heading; nothing's in a hurry.  The chemistry and resist do the work, with Veronica looking on patiently, tweezers in hand, for the right moment to assist or not.  It's the classic look but I never tire of it.  Incidentally, the resist was not what you think: it was sticky labels - Rich will be excited to hear that - so we can assume the whole procedure took relatively little time, start to finish.  The paper was Kodak AZO, single weight, expired 1977, and her chemistry was from Sprint.


In a somewhat different vein is Losing It (2015), a glorious, dancing bit of hybrid work, with photogrammed blots of human hair, presumably the artist's, merging with tiny pools of chemigramish material at each station of a balletic space.  It was created on Kodak Polymax II RC paper, expired 2003.

Nolan Preece is seen with The Clearing, a resist-driven piece, the tiny crackles and fissures in the surface amounting to a signature of sorts for the type of acrylic floor wax that he used.  The whole conception is simple and rather effective and quite welcome.

Here's a detail from the lower left of the picture:

His linework has an almost fractal quality, in that the closer you get the farther you see you must go to get it all.  It is this infinitely self-generating property of chemigrams and their resists that endlessly fascinates.


Eva Nikolova will not be left out, contributing a large paneled work entitled Tributaries (2015) consisting of 12 chemigrams 5x7" each on Dupont Defender Velour Black, expired 1944. 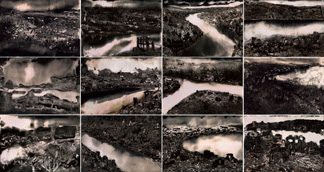 I never quite know how to talk about her work: is it history or geography, vision or curse?  Are these deep placid rivers draining a ravaged landscape to the sea, where it will be cleansed and renewed?  Like so many chemigrams, this one must be seen up close (maybe at 3 inches!), so we will look for clues there.  Especially telling is the deft treatment of her trademark resists - peanut butter, guava paste, marshmellow fluff (see the previous post), but for us they both reveal all and hide everything as quickly.  And like in Preece's work, the closer you get to it the more you realize you don't know anything.  It's that damned fractality of chemigrams that gives us amazing work like this - in part, but the rest is pure Eva.